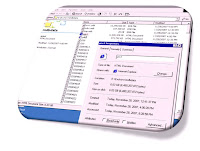 The question came today from one of my peer at work was asking a question about priv1.html file, when we are performing defrag on exchange 2000 databases. What is this file about I never know exchange would use HTML file as database. My peer knew the priv1.edb file and what it does very well; nevertheless, the HTML file seemed to him a bit abnormal.

priv1.edb, but it also has an escort file called priv1.stm. (priv1.html), for some weird reason windows reads this file as HTML file (go figure), which confuses some of the exchange administrators.

The priv1.edb holds message data from messages that are in native MAPI format, the STM file holds content for internet formatted messages. Both are required to get the database to function correctly.

When you put a limit on a mailbox,

When you do a defrag of the edb, the stm file is automatically also defragged.

Email ThisBlogThis!Share to TwitterShare to FacebookShare to Pinterest
Labels: DataBase 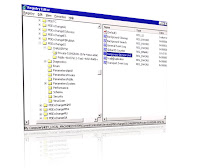 Exchange server 2000 is not accessible. Event ID logs 445; Exchange databases reached the 16 GIG limits. This will cause interruption on the mail flow.

I would love to say here, upgrade to exchange 2007 if all it is possible, at least to Exchange 2003 to get the advantage of 75Gig limit in DB. In some cases, decision makers (Managers) are very none sense, to be honest. I have seen million of times so far same scenario. For technical people it is very frustrating to deal with manager who has no clue about current technology. Remember this is the way it is and we have to leave with this. Follow the step below

ESEUTIL /D is the immediate action we have to take in this particular issue. We bumped the DB size to 17GIG with following registry hack.

The C drive was out of space therefore we need to perform the Defrag to E drive, where we had plenty of free space

This was the Temp file is going to be created on the E Drive. Many o f you know if already the story behind the temp database. Exchange will create an empty database in this example is the Temp database and will copy good mail data into this DB. When exchange is done, it will tell you "Hey I have created brad new database, go ahead delete the original one and use this one instead."

Determine White Space Event id 1221. If it is too late and exchange databases are dismounted due to space problem, use ESEUTIL /MS determine the white space.

Space Dump with ESEUTIL /MS to determine the space. Also ensure that you have 110% free disk space associated with the Exchange database size.

After running ESEUTIL, check the log file called "integ.raw "to see the results.

Here are the final Steps:

Email ThisBlogThis!Share to TwitterShare to FacebookShare to Pinterest
Labels: DataBase 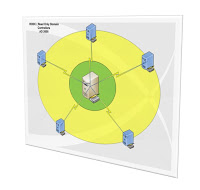 The security aspect is getting more and more integrated into windows 2008 servers. Therefore, if we examine the new futures in active directory we will quickly realize, the security focus around most of the directors and DNS services. The read only DC concept is brand new; it makes me remember UNIX concept. The out the box Windows servers seems to be more robust and contains more granular delegation of task, which can be delegated to administrators.

Below some of the highlights, I have observed and wanted to share with you all.

The DIT Database is read only. The changes must be done on the writable DC, such as password changes. RODC is primary targeted to remote sites and Edge offices. The security treads Each RODC has its own Kerberos ticketing system.

Exchange 2007 Versions and some of the futures

Support all futures as standard edition

Getting ready to install Exchange 2007?

Below is nice table to have it handy going trough upgrading or implementing exchange 2007.

Here are the new Exams:

I hope you get all you need

We will figure out what exactly is getting blocked by Websense. To perform this function follows the steps below.

Note: you need to know the client IP address whom is having trouble when accessing to this URL. You can also prepare a staging PC, and simulate the same scenario, in this case you will use the staging PC's IP Address.

Replace the IP address in this example to IP address of the Client PC, who is having trouble to access the problem link, or pages.

This will resolve the issue, and client will be able to access the full functionality of the website 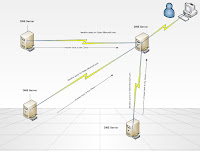 Let's try to understand two types of queries are being used by DNS server for name resolutions.

We will perform Iterative query to the SMTP25.org DNS servers for Microsoft.com, and will look into each step and observer what happens.

As you can see client is doing all the heavy lifting, client needs to go to different DNS server each time, client get partial answer and finally client is able to locate the resource server IP Addresses.

We will use same story for recursive query. The DNS server will perform the heavy lifting; client is talking too at the first time. If we were the ask same question, to the DNS server we are talking too,

Where is Sales.microsoft.com the same process will be performed by a DNS server and when DNS server is able to locate the IP address for requested namespace, DNS server will return this information to the client, so that client can open direct TCP/IP connection to that server.

Just like, you have a personal secretary and you want to find the phone number of your best body "James" from high school. You ask your secretary to get you James number, your secretary calls your high school, gets information about James home address, She lookup up on the yellow book locates the phone number calls the number , figures out James in no longer living there, but people give her a number where he can be reached at. She makes sure James is available on that number, and turns the number to you. Now you call your body James and start talking to him. Your secretary has done all the heavy lifting for you, which she used Recursive queries to get the James number.

Email ThisBlogThis!Share to TwitterShare to FacebookShare to Pinterest
Labels: DNS 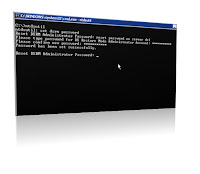 DSRM is being configured at the first time, when a server promoted to be a domain controller. Often time administrators make up a password and this password gets forgotten and when it is needed, resetting DSRM password will be necessary. This process is very straight forward. Do not confuse this password with Domain administrator password. When DSRM mode is initiated, the local administrator account is authenticated by the SAM (Security account manager).

Go to command Line and follow the steps below. (NTSUTIL is part of windows 2003 support tools)

How to Move .DIT Database to another location

In this scenario the drive holds the NTDS.DIT database is going out of space and we need to move it to different drive.

Use the move logs to command to move the directory service log files to another folder. For the new settings to take effect, restart the computer after you move the log files. 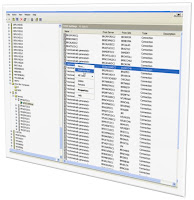 Creating manual connections might save the day. The issue regarding AD replication might be connected to Exchange. A user go created the RUS is not stamping the user; therefore SMTP Proxy address never gets generated.

Note: Microsoft does not recommend creating manual connections, since KCC is automated process and design to figured out the best path for replication, Microsoft recommends

Wait for changes gets replication in the AD topology. On the connector and choose replicate now.

The Purpose of KCC

Data integrity is maintained by tracking changes on each domain controller and updating other domain controllers in a systematic way. Active Directory replication uses a connection topology that is created automatically, which makes optimal use of beneficial network connections and frees the administrators from having to make such decisions.

What replicates with KCC? 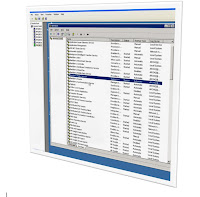 Here is the correct way of starting blackberry services. (RDC), the rest of the services can be restarted on any order after following the RDC rule.Restart the Black Berry Services in this order below


Other services can be started in any order,

BlackBerry How to test mail flow on Users Handheld

Here is the situation, users calls and complain not getting messages to their handheld. Most of the time there is a problem with either BlackBerry or the wireless provider. Time to time the problem is cause by end user. If this is the case how we can identify the message is getting to handheld even though we don't have the handheld in front of us. Here is nice trick we learned from RIM support.

Problem: user is assuming not getting mail to this handheld

Do not forget the brackets on the Subject line, and ask the user to reply the message.

I think this is real slick 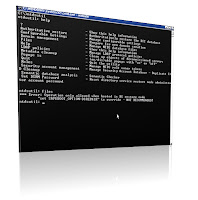 In my example the DC , which is having heavy replication problems need defragmetation on the .DIT database. You may ask yourself why .DIT database reached 6GIG ( the actual size o fthe .DIT database is less than 1GIG) on this Domain Controller.

What Microsoft recommends for the DLT in windows 2000 based servers

How to defrag The Directory Information Tree (DIT) database.

Before , I get to this you must read following articles

A sample customer experience , it is so unbelivable the place I work currenlty is 4 times worst than , what Microsoft talks about in the article. Seriousily thre DL object in one domain exides 379.000 DLT object in my case.

In the case of the link-tracking objects, marking the object for deletion only amounts to two attributes being removed: dscorepropagationdata and objectcategory. The deletion of the two attributes results in an initial savings of 34 bytes. However, the process of marking the link-tracking object for deletion also updates the object by adding an IS_DELETED attribute (4 bytes), and by mangling the RDN and the "common name" attributes, causing each of those attributes to grow by about 80 bytes. In addition, the "replication metadata" attribute also grows by about 50 bytes to reflect the updates performed on this object. So, by marking a link-tracking object for deletion, the object will end up growing by approximately 200 bytes. The NTDS.DIT will not exhibit a reduction in size until the deleted objects have tombstoned, been garbage collected and an offline defragmentation performed.