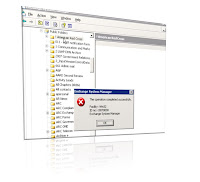 I wish there would be a way to turn the GUI totally off on the server. There really should be no reason to open a browser and surf on the internet from a server anyway. We discovered following error on our dedicated public folder server, ESM was crapping out and generating errors.

The following DLL files won't seem to like IE 7.0. 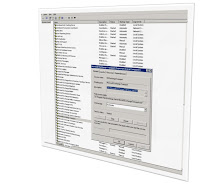 Exchange 2007 is for sure rock solid messaging application. The more I dive into it, I understand the exchange is trying to be the, the future SMTP mail relay gateway and the next generation messaging application. To be honest I must say, I am very impressed with all hard work have been done behind this great messaging application, Exchange 2007. In reality, most of the enterprise networks already using UNIX appliance as their mail gateways. Where I work, we use IronPort as our mail gateways. We had some other vendor over years and replaced recently those appliances to IronPort mail gateways. I have not logged into IronPort since we deployed them. Why because I did not need too, it has been working solid and incredible performance, where a million e-mails hits our gateways in 1 HR time interval.

It is going to be very hard for exchange to replace some of these, appliance in the near future as mail gateways, since UNIX has its own reputation over years and working rock solid.

The design of exchange 2007 seems to be covering all bases, as these UNIX appliances in the market. Why Exchange never to be considered as mail relay gateway in the past. If you try to install exchange 2003 on windows and try to place in DMZ most likely, you would lose your job, since this would not be a secure implementation.

First reason is windows operation system; unfortunately, it is not as secure as UNIX, yet. Secondly, the primary protocol for Exchange 2003, SMTP is part of IIS (SMTP Stack). Installing IIS on top of none secure OS, could bring great chance of being hacked.

Now what has changed? With Exchange 2007

The SMTP stack is the core infrastructure of Exchange. Without it, we cannot send and receive e-mail messages. Microsoft rewrote the SMTP Transport Stack and start running as the Network Service account. This reduced the risks that are associated with denial of service attacks. Of course, this eliminated the dependency on IIS and reduced the risk of being hacked for DMZ type of deployment.

For small companies who do not have money-getting exchange 2007 seems to be the way to go. For large enterprise, networks will implement exchange 2007 in other roles and take advantage of the great messaging application. I hope new Edge role is going to be used in the future as well. Microsoft Server OS has done great improvement and getting much better in my opinion. Smart shell (power Shell) , being able to turn the GUI off on the DMZ type of implementation and taking advantage from Shell (Using SSH perhaps) will bring the Microsoft Server OS to a quality level as others out there in the very near future. 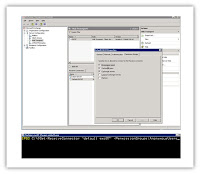 After successful installation of exchange 2007 following message, appears on the test mail. Technical details of permanent failure "PERM_FAILURE: SMTP Error (state 12): 530 5.7.1 Client was not authenticated"Basic Exchange 101, fire up command line and use telnet command on port 25 to the mail server within the network to see what is going on .

The anonymous users do not have permission on the "Default receive connector."

Now try the telnet on port 25 to your mail server, everything should work.

Here is the output

I will use following command to achieve the same results from management shell.

The way Blackberry server discovers the mailboxes for the BES users by using MAPI and rapping worker treats into the MAPI session. Worker treats are processes build into the BES server, to discover and establish state full connection to the hidden BES mailbox on the each user mailbox. Each BES server is capable of handling 100 worker treads and up to 2000 users.


Mailbox moved within the same server, from one mail store to another one, will break the BB connection for the user got moved, due to limitation build into the BES user mailbox discovery process. Because BES scans users mailboxes for changes in the Server DN (distinguish name).

Blackberry Server normally generates 3 to 4 times more MAPI traffic then a regular MAPI user. The BES is being used in conjunction with latency caused severe problems. Not also BES experience but also other aspect of the network will suffer as consequence of this problem.

The size of the mailbox is not what causes the latency but specifically the number of items in your Outlook folders. The number of open items results the same behavior in poor outlook experience the famous Christmas balloon "exchange is retrieving data from such exchange server" everyone's favorite message will appears from the outlook.

An internal processing error has occurred. Id no c1041427 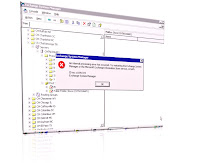 Exchange 2000 mail store would not mount and generate the following errors. After looking around I discovered two steps approach to remedy the dilemma and I wanted to post here for those who might need it.

The first thing to check is to make sure the AV software is not causing the issue. Open registry editor on the offended exchange server and drill down to following registry key

Restart the information store service and mount the mail stores.

If this won't help you, keep reading, there might be corruption on the either databases or the log files.

What Is a "Shadowed Header?"

Now it is time to perform some clean up

"How useful was this article? Want to see a tip not listed? Please leave a comment."

How to recover deleted items from Public folders.

Move to the PFDEVAdmin folder, and then double-click the PFDAVAdmin.exe file. 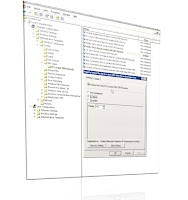 Isn't it the dream for every exchange administrators to have dedicated DC/GC servers for Exchange servers only? Our goal is simple we will dedicate GC for exchange server in enterprise environment. Pointing DS access to the DC's is not good enough. Those of you experts know already the meaning of Multi Master Replication model with AD 2000 and 2003 and how it works.

Follow the simple steps below to get to work done.

Prepare a DC/GC to be used by Exchange servers only

Go to Event log and you will see this DC is no longer authenticating users, and being used by DSAccess only

Specifies the Priority field in the SRV resource records registered by domain controllers (DC) to which this setting is applied. These DNS records are dynamically registered by the Net Logon service and are used to locate the DC.

The Priority field in the SRV record sets the preference for target hosts (specified in the SRV record's Target field). DNS clients that query for SRV resource records attempt to contact the first reachable host with the lowest priority number listed.

To specify the Priority in the DC Locator DNS SRV resource records, click Enabled, and then enter a value. The range of values is 0 to 65535. If this setting is not configured, it is not applied to any DCs, and DCs use their local configuration.

We are in the middle of big migration to new Datacenter. I have build migration strategy for the existing enterprise BES farm, 7 BES servers, several thousands of users. I have decided to share some of the questions and answers I had to include my assessment and migration plan with you all. I hope, this document will may assist you in regards to BES migration. As always do not forget to backup your database with any type of operations. Make sure the communication with end users has taken place and all required permission for the migration is worked out. (Politics)

Moving BES SQL Database to different location then BES servers would or would not cause issues such as bad user experience latency and etc.

If it is all possible avoid doing this action. Mail agent, dispatcher services and other BES services depends on SQL database, these services interact with the SQL database in day to day operations with BES server; these are extended resources therefore latency will be issues if the Database is in the different location (latency factor) when BES servers in another location

What would be good way of accomplishing moving existing BES server from one location to another location in heavily used BES environment.

3.When all users are moved into new BES far in the new location , wait for some time and make sure Bes operation are stable as it was.

Here are the steps to migrate your BlackBerry Enterprise Server Database from one machine to another SQL Server:

Press Enter. It will create the BESTemp database and run all the other necessary scripts to run a BlackBerry Database on SQL. 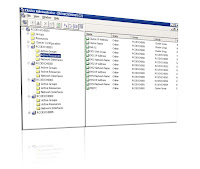 We are in the middle of standing up new clustered exchange servers into our new data center. Part of the process is to build the new cluster servers and move mailboxes over to new exchange server. We probably will build a new cluster within a year and go for exchange 2007. Knowing the cluster components are critical therefore I have decided to post below table here at my blog. Microsoft Cluster Service is consisting of several device drivers and services. These modules reside on top of the Operating system (Windows enterprise edition) and behave as a service. The cluster service provides basic functions that the operating system needs in order to support clustering

We have implemented IronPort devices and dumped our legacy SMTP gateways. I am truly impressed with IronPort performance, heads up no wonder it is called IronPort. I had to prepare a little summary sheet for IronPort and decided to share here with you all

IronPort is capable of performing following

IP reputation is called reputation Filtering ( checks the sender IP reputation).The Sender Base Reputation Service provides an accurate, flexible way for users to reject or throttle suspected spam based on the connecting IP address of the remote host.

How Does IronPort identifies Spam?

Analyzing multi-dimensional relationships allows CASE to catch a broad range of threat while maintaining exceptional accuracy. For example, a message that has content claiming to be from a legitimate financial institution but that is sent from an IP address on a consumer broadband network or that contains a URL hosted on a "zombie" PC will be viewed as suspicious. In contrast, a message coming from a pharmaceutical company with a positive reputation will not be tagged as spam even if the message contains words closely correlated with spam.

Finally, we have replaced our mail gateways to Iron Port C350. We deployed 3 Iron Port in our network and God knows how much we suffered with old mail gateway appliance. It was horrible experience including support and the product itself. No need to mention names. Those of you know me personally I will recommend not to buy and what to buy as dedicated mail relay gateway, ping me at any time.

I will write more about Iron Port, let me tell you, incredible device, awesome support engineers so far. The Shell is UNIX, and most of the basic Unix commands works like a charm. Incredible flexible and noticeable powerful mail gateway, no wonder 90% percent of the government business using Iron Port in Washington DC.

Be carefully when you decide to buy dedicated mail gateway, wrong decision will give you big head and lost of revenue eventually.