One of the most frequent asked question is how to redirect HTTP request for OWA in Exchange 2010 to SSL port. I have post in the past showing how to make simple modifications on OWA page, with easy approach. I will go over this one more time. If you set redirection time to “0” second with simple HTML code you do not even need to make the first splash page. I do like seeing the splash page hence I will first show you how to modify / Create the default IIS welcome page with simple steps listed here. 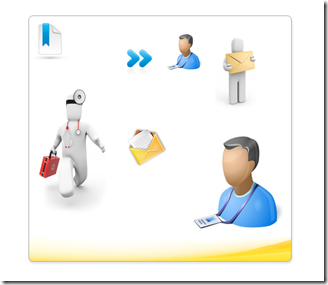 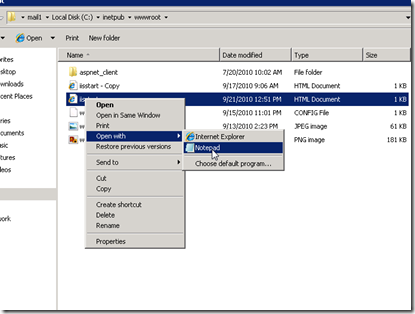 For automatic redirection we will add below code into this HTML page right after <head> tag.

Rest of the HTML code is same as fallows 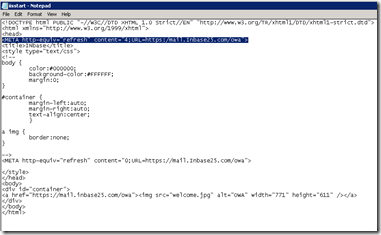 As it is seen all we actually did was replacing simple HTMP code into default IIS page and direct port 80 request to SLL port. I assume you have proper firewall rules configured on your firewall to make this work.

This is supper easy way of accomplishing re-direction after deploying OWA in Exchange 2010.

Update Rollup 1 for Exchange Server 2007 Service Pack 3 has been released..

This is first update on top of SP3 Exchange 2007 , the updates included fallowing fixes………..

KB 983529 The EdgeTransport.exe process crashes and then restarts on an Exchange Server 2007 server

SP1 for Exchange 2010 release for sure was great news and made Exchange 2010 more stronger. Most of the migration scenarios and people who wanted to wait to see at least SP1 release start shifting into upgrade path after Sp1 release. Those of you you did upgrade early will remember , one of the most confusing part was collecting all required updates to get Sp1 rolling. Here is the good new Exchange team made great post helping to easy Sp1 deployment. I think it is great post and supper useful. I am including link , in this link you will get to all download you need and some of the issues came up in deploying Sp1 also addressed here……

Here’s a matrix of the up,,,, Read more click on above link