In a DAG ( Exchange 2013) to have ability to perform automatic failover requires three separate physical network locations.In the scenario below two redundant datacenters for DAG and third datacenter is used (Azure Network.) for Witness server for DAG1. If you look carefully you will realize we used two different Active Directory Site for DC1 and DC2 and stretched the DAG1 on both datacenters. We placed Domain controller on the Azure network and created AD site. ( Enabling FSW on the DC  while possible it is not recommended configuration)

This configuration requires a multi-site VPN. It has always been possible to connect your organization's network to Microsoft Azure using a site-to-site VPN connection. However, in the past, Azure supported only a single site-to-site VPN. Since configuring a DAG and its witness across three datacenters required multiple site-to-site VPNs, placement of the DAG witness on an Azure VM wasn't initially possible

How to configure Azure network for FSW is documented here

In this configuration several things to be considered. 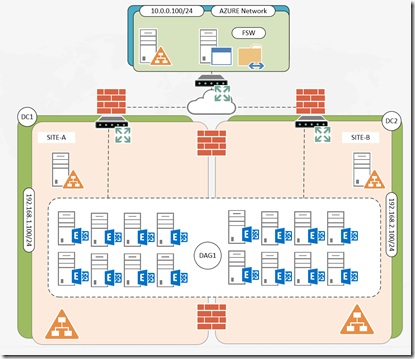 There are major changes within Exchange 2013 compared to Exchange 2010. The way Outlook Client connect to Mailbox Server to get its mail data is  “simplified” there is no need for middle tier with Exchange 2013. The way I see,  as long as Exchange Server and its architecture requires less IOPS to operate, there will be more room for improvements and simplicity. 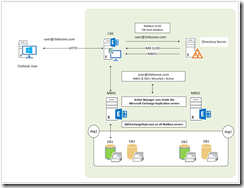