One of the most frequent asked question around design and deployment scenarios , should business go for virtualization when it comes to deploying Exchange 2010 and newest versions. This has almost be the hot topic to be honest and I wanted to highlight some of the bullet point to help for those who need to give the similar decisions on your deployment project.

Before we deep dive into Virtualization we need to be clear about combined roles in Exchange 2010 deployment and talk about it how much it make sense ?

Another significant difference in between Exchange 2010 and 2013 is the simplicity, and doing things in easy and more efficient way. The server roles reduction in Exchange 2013 is one of the example, so let's take a quick look server roles so we do understand and give better decision on combining server roles. 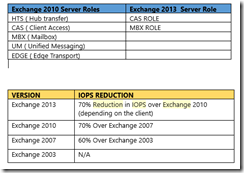 I am personally favoring to go for Virtualization when it is possible and makes sense for the business and here are some of the compelling reasons why I think the Virtualization is the way to go.

The Exchange server application is more and more focusing about the idea of simplicity, getting things done in simple way while providing better services and of course this statement will expand from server perspective to end user experience.

The answer IMO to this is real short and yes, if you ever design any environment you will quickly see the reduction on the server numbers once they are combined, Remember the most reason ratio for CAS and MBX server, one to one. So if you have 10MBX Server you will need 10 CAS Servers and most probably you will combine CAS & HTS Servers , this is what most people have been doing since Exchange 2007.

Now imagine if you combine HTS, CAS and MBX roles the server count in the same example reduces 50 percent and this is why I am all for combining roles which makes the most sense.

Conclusion: As you can see from this short post , there are good enough reasons, why to start with multi role deployment and take advantage of Virtualization technologies when deploying Exchange 2010 and 2013 versions.Remember the more simple design is the “best” design in most of the cases. Exchange 2013 has many futures simplifies such deployment and brings on a table huge IOPS reduction.

would you recommend the same about Exchange 2013 implementations?

Best Moving Company +971 50 3605353
Office and staff relocation should run as professionally and cost efficiently as any successful business. Therefore ADV MOVERS Corporate aim to provide you with the best moving services and moves without any comebacks.